A lady has recounted how a man she went on a date with ditched her after she refused to pay his bill.

The lady identified on twitter as Coco The Lagos Baker, recounted going on a date with a man her cousin introduced her to and after they both ordered and finished up, he expected her to pay the bill which she refused.

According to her, she paid for only what she had but the man who had expected her to pay the entire bill started making up lies that he forgot his ATM in the car. She however insisted she was not paying the bill and that was the beginning of the end of a date gone sour. 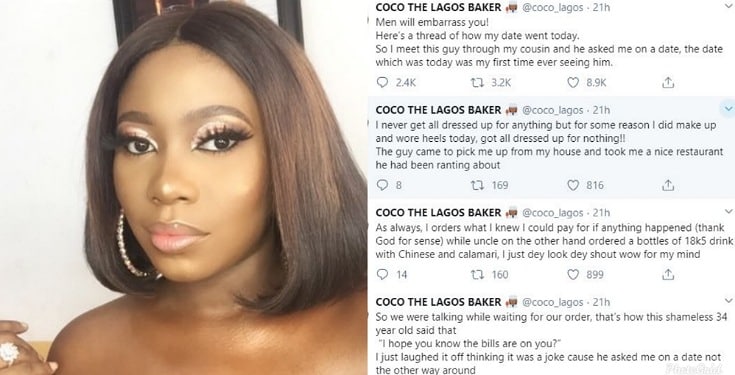 “Men will embarrass you!
Here’s a thread of how my date went today.
So I meet this guy through my cousin and he asked me on a date, the date which was today was my first time ever seeing him.

“As always, I orders what I knew I could pay for if anything happened (thank God for sense) while uncle on the other hand ordered a bottles of 18k5 drink with Chinese and calamari, I just dey look dey shout wow for my mind

“So we were talking while waiting for our order, that’s how this shameless 34 year old said that “I hope you know the bills are on you?” I just laughed it off thinking it was a joke cause he asked me on a date not the other way around

“While we were eating, uncle was yanning me how he has a main girlfriend but he doesn’t love her anymore and he wants to start new with me and if I agree to date him he’s ready to get married in 5 months, blah blah blah, he’s serious about me, I look calm and collected

“I look reasonable and responsible and he loves that I’m business oriented and independent, I just dey look am. Dears!! I say again! MEN WILL EMBARRASS YOU!

“So we finished eating and the waiter came to clear our table and give us the bill (I had in mind to split it as I always offer) So I took the receipt and asked the waiter to bring the pos, me expecting the guy to also bring out his card as I had already put mine on the table

“Uncle was just there pressing phone, bill was N33,500 My food cost N10,200 according to the bill, as I saw that the guy wasn’t even minding me and the waiter, I just pointed out with my finger the things on the list that I ate to the waiter and paid for my own food

“And that was where the drama started I told him that he can’t expect me to pay for lunch that he offered to buy me cause it wasn’t in my budget, uncle now started with he forgot his atm card in the car…

“That I should just pay for it, at this point the waiter was already being loud and I was getting irritated and embarrassed. I explained that I can’t do that as it wasn’t in my budget,

“he was now like should he transfer to me so I can pay with my card? I agreed and gave my account details only for me to get credit if 3k in his name

“At this point I knew I was out with a clown, I was already so pissed and I couldn’t leave

“I stood on my ground that I wasn’t going to pay because he was the one who invited me out, it was really embarrassing cause there were a group of coppers there and the whole thing was getting loud, he cash called someone and I think the person borrowed him money or something

“But that’s not my business, obviously I was still expecting him to drop me back at home cause he came to pick me, we walked outside to the parking lot, got into the car, uncle started the car and asked me to come down and he drove off”

Nigeria on the brink — Eminent Nigerians-newsng.org

Don’t Marry A Man Who Has No Job-newsng.org