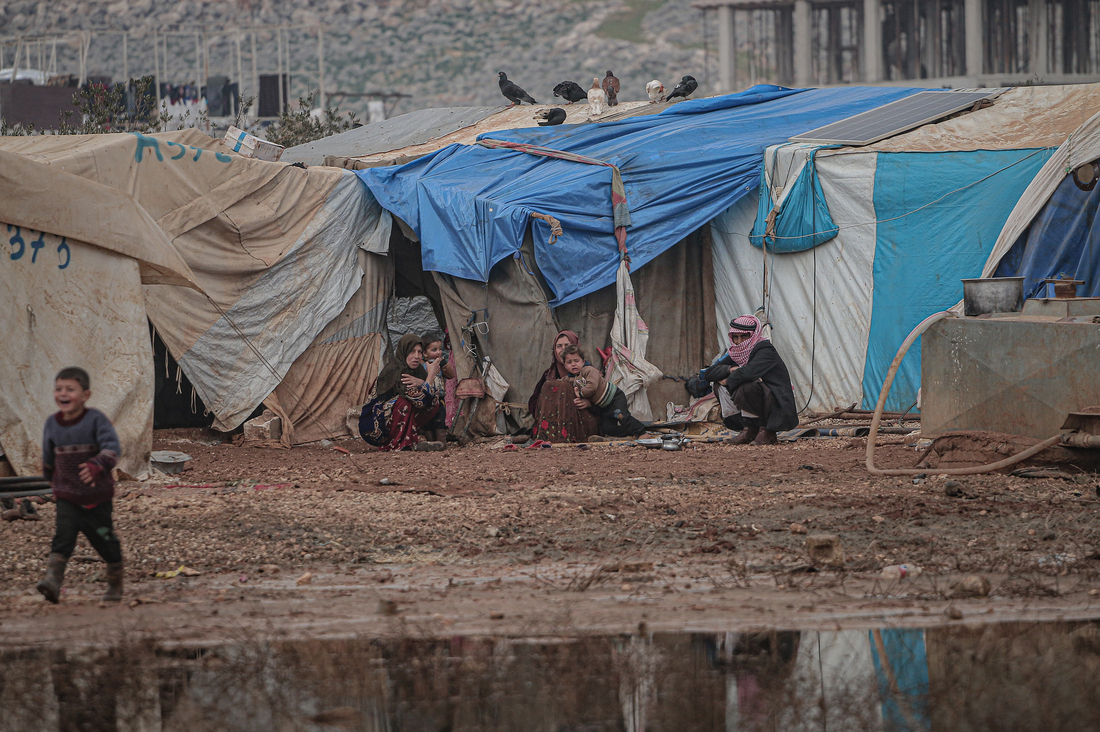 These refugees, who have fled the fighting in Idlib province, live in tents during a cold and snowy winter. This photo was taken on February 22. 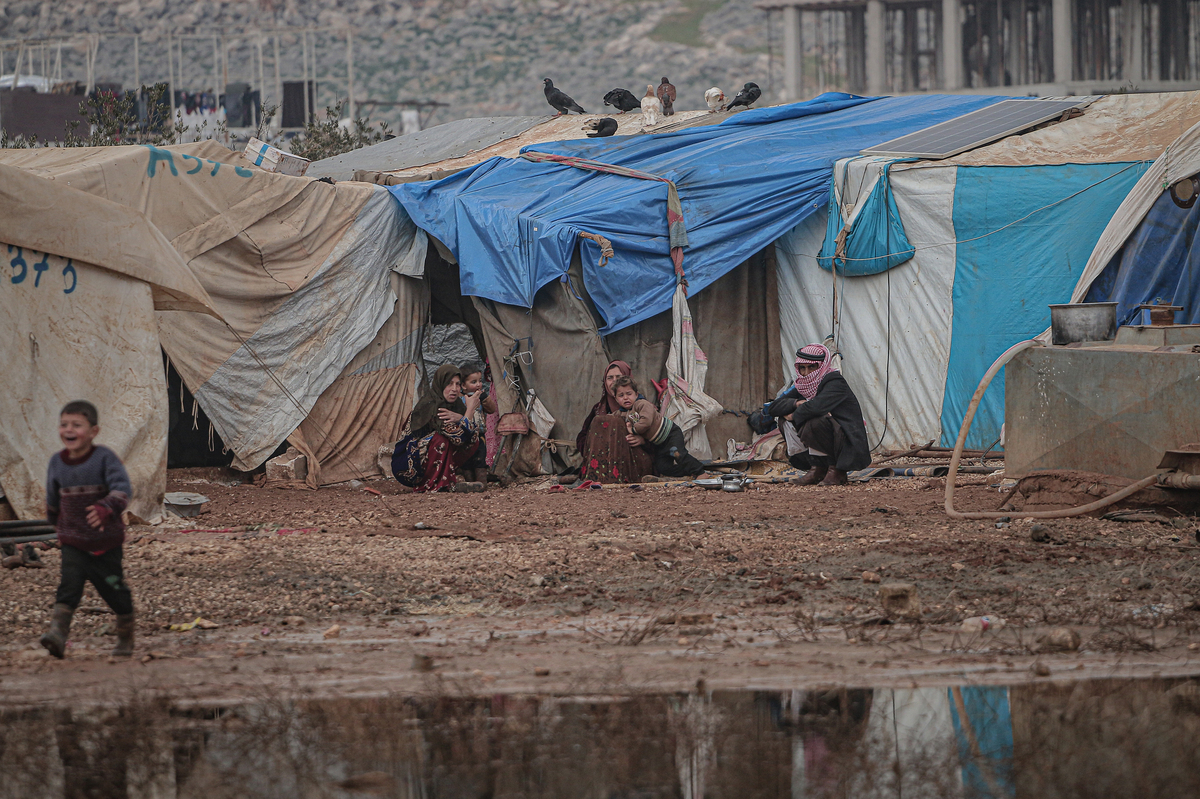 These refugees, who have fled the fighting in Idlib province, live in tents during a cold and snowy winter. This photo was taken on February 22.

The humanitarian crisis in Syria has reached a “horrifying new level,” according to a U.N. official.

That’s how Mark Lowcock, the United Nations under-secretary for humanitarian affairs and emergency relief coordinator, described conditions in northwest Syria based on eyewitness accounts from U.N. staff in and around Idlib province in northwest Syria.

Idlib has been under air attack for years, but the intensity of those attacks is now worse and there are new ground attacks as well, says Robert Ford, former ambassador to Syria under the Obama administration and now a senior fellow at the Middle East Institute in Washington, D.C. As the last opposition stronghold, the province is home to about three million people, half of them refugees from other parts of Syria.

This latest humanitarian crisis in the nine-year-old conflict was brought on by fighting that has escalated since December, with Syrian, Turkish and Russian troops attacking opposition forces. Idlib has seen airstrikes as well as shelling from artillery and ground-based missiles.

What’s more, temperatures have dropped below freezing many nights since December, and heavy snow has fallen, most recently in mid-February.

Lowcock’s report said the vast majority of those displaced are women and children, many of whom are sleeping outside because the refugee camps are full. “Mothers burn plastic to keep children warm. Babies and small children are dying because of the cold,” wrote Lowcock.

Zaher Sahloul, a physician and president and cofounder of aid organization MedGlobal, was last in Idlib in January and said with so little room people are sleeping anywhere they can, including tents in a refugee camp set up in a soccer field and tiny classrooms in schools. Many children had respiratory illnesses because of the overcrowding and cold. When there is no space in indoor structures set up as shelter, families pitch tents, of varying strength and quality, often in the mud that accumulates when rain hits the snow. More rain is expected this week.

Sahloul, a critical care physician, says among the people he met in refugee camps was a girl, Ahlam, who said she was 12, collecting branches that her family would burn to heat their tent. Another 12-year-old, who said her name was Asma, told him she had been displaced seven times and was walking two miles to school each way. “I wish I could walk not in the mud,” Asma told Sahloul. 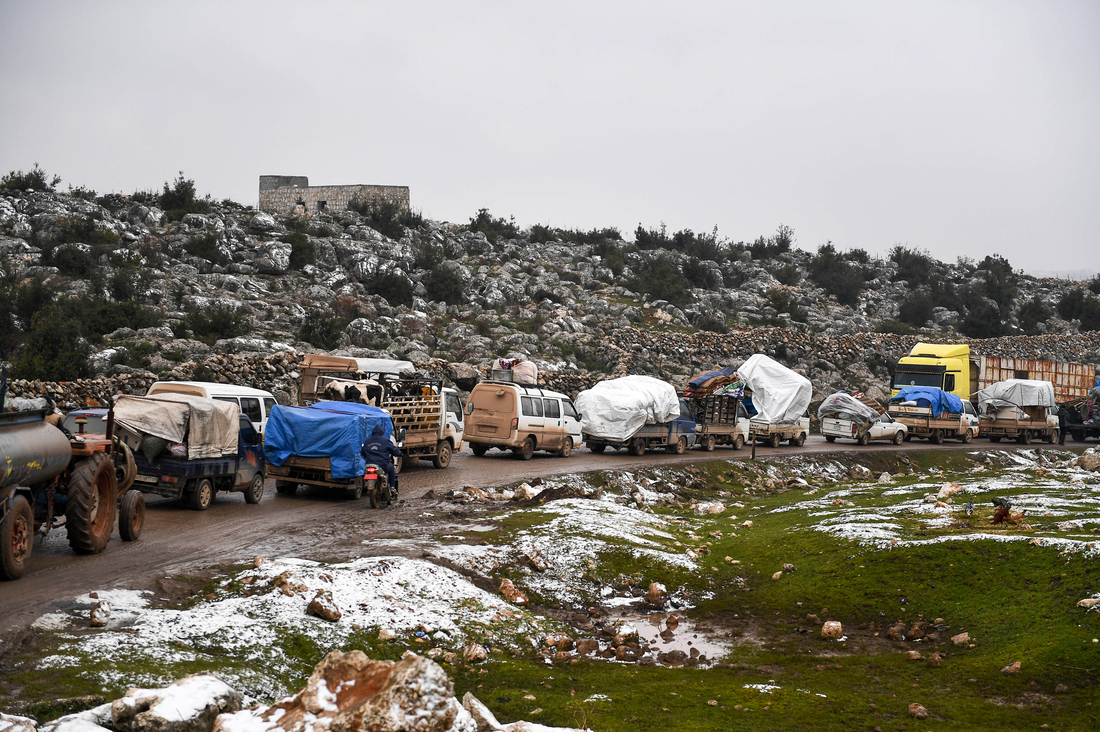 Syrian civilians flee from Idlib, seeking safety from the fighting that began escalating in December. The photo was taken on February 13. 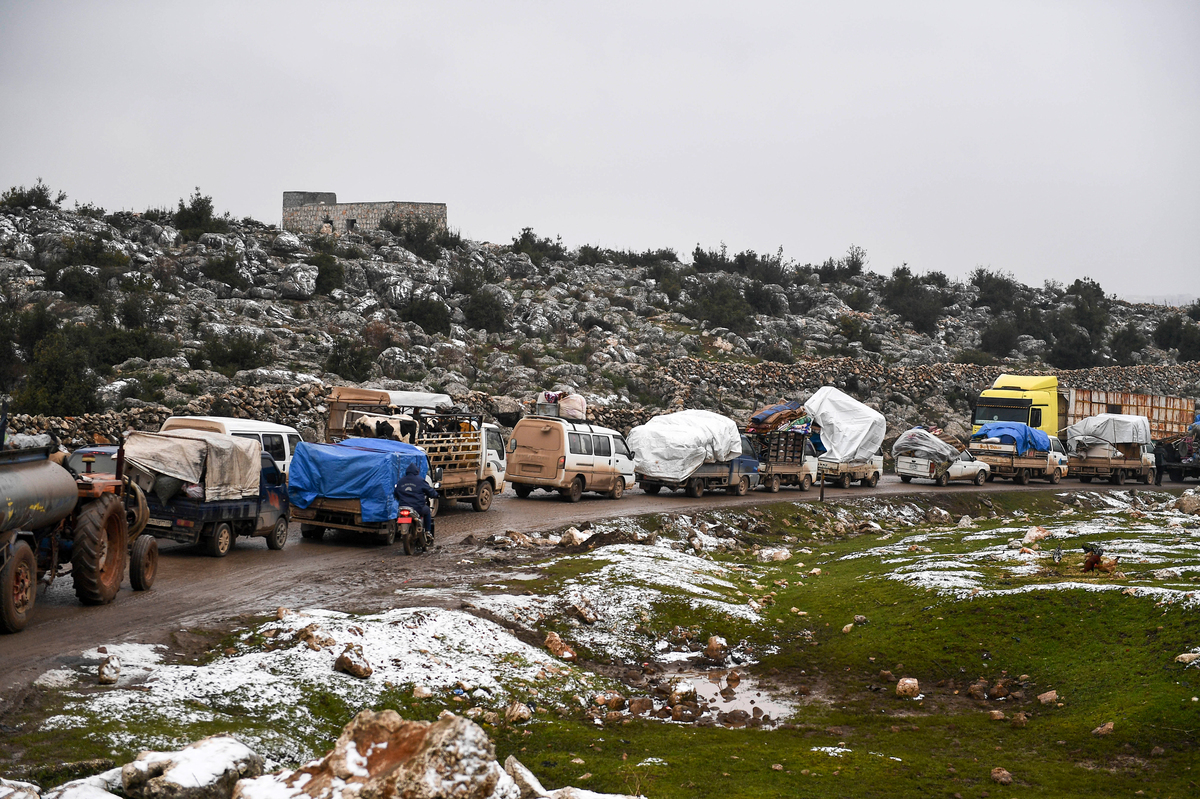 Syrian civilians flee from Idlib, seeking safety from the fighting that began escalating in December. The photo was taken on February 13.

Many of the newly displaced have had to move to new locations in Idlib. Others are headed north toward to the Turkish border, though Turkey is not accepting new refugees.

Aid organizations are on the ground but many local aid workers, and their families, face the same harsh conditions as those they are trying to help, says Christy Delafield, spokeswoman for aid group Mercy Corps. Like the refugees, they are living in tents or are on the move due to the fighting.

In his report Mark Lowcock said that equipment and facilities of aid workers were being destroyed and that the aid workers themselves were among those injured and killed. Adding to the difficulty for aid organizations,” says Robert Ford, is that the Syrian government has taken over two main highways within Syria so the aid groups now depend on slower back roads to deliver supplies.

The numbers of displaced people have grown — from hundreds a day before December to thousands a day now, according to U.N. spokesman Farhan Haq.

“The sheer number of displaced families is challenging, and our size and level of funding just cannot cope with [sometimes] 50,000 people a day who are fleeing,” said Erin Taylor, senior communications director for Save the Children. “In addition, humanitarian workers are being displaced themselves and had to leave behind programs and equipment in areas that are now too close to the front lines to return to.”

Juliette Touma, chief of communications at UNICEF’s Middle East and North Africa Regional Office, told NPR by phone from Amman that “this mass displacement is an exodus of people that we have not witnessed before in Syria.”

Suzanne Meridien, executive director of the Syrian American Council, which advocates for a secular democracy in Syria, agrees. “Before this most recent wave, there were already 6.2 million internally displaced persons in Syria, including 2.5 million children, according to the U.N. High Commissioner for Refugees,” she says. “When we hear from people inside Syria, they tell us this is like nothing anyone has ever seen before. The fear and the chaos – people are fleeing, but they don’t even know where to go.”” 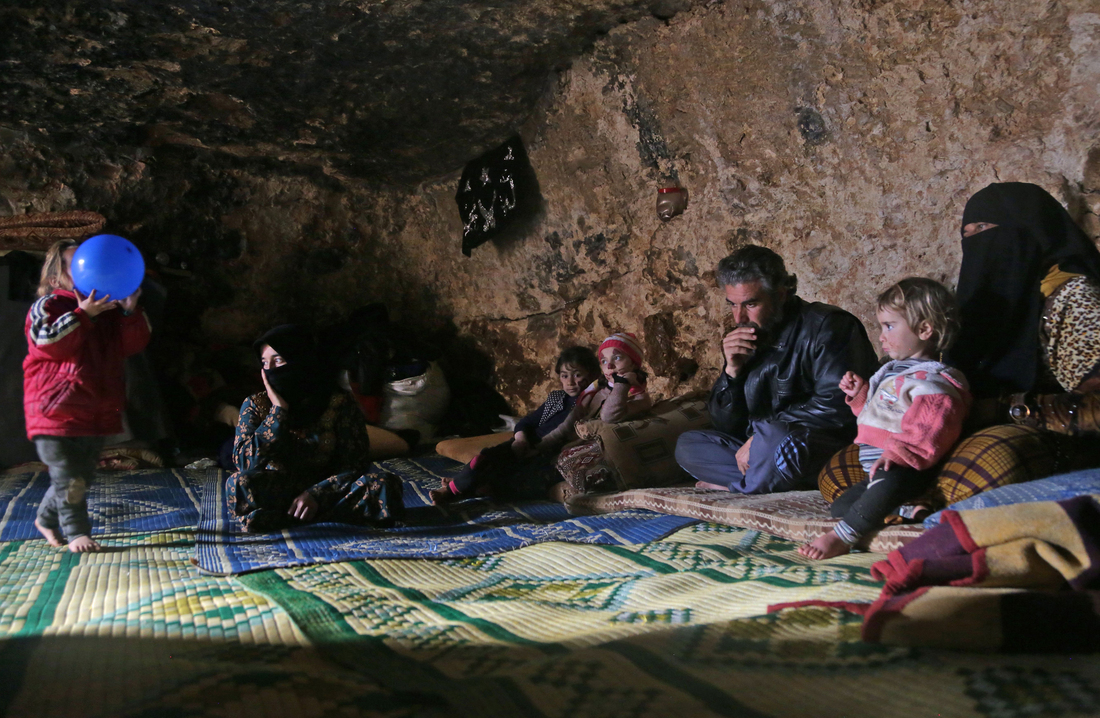 Members of a family of internally displaced Syrians sit in an underground shelter in Idlib province. The photo was taken on Sunday, February 23. 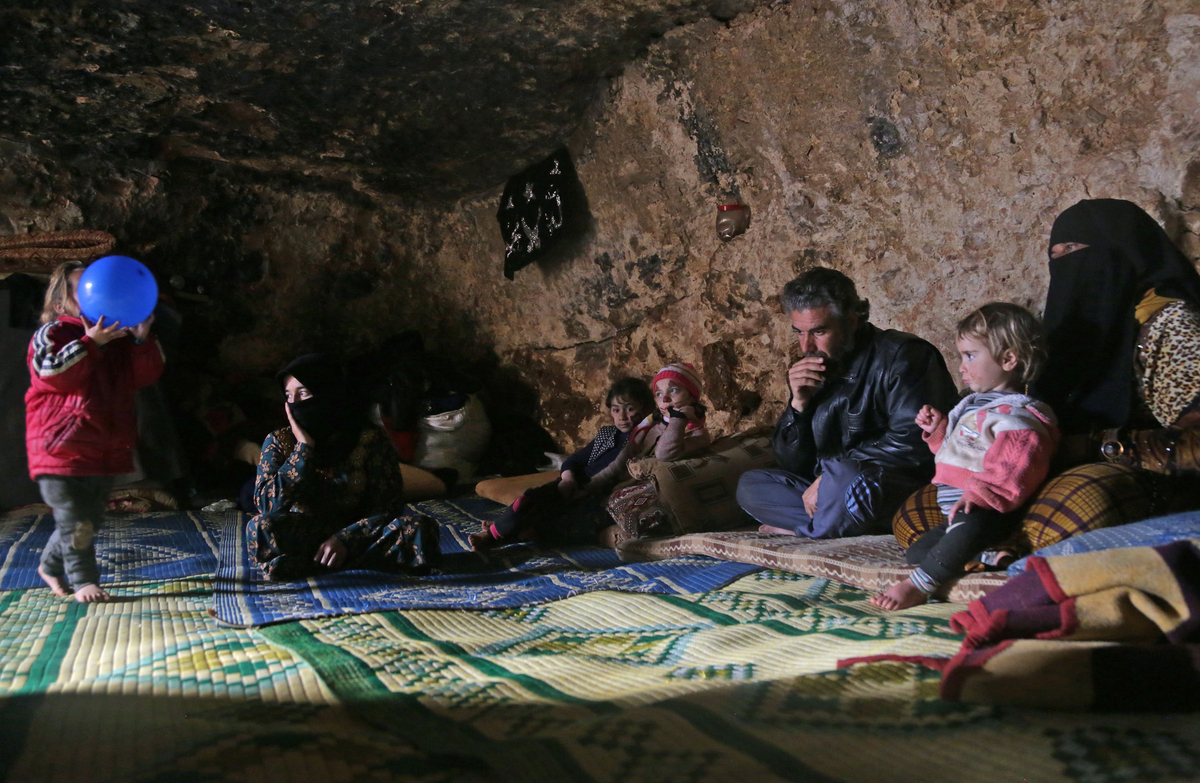 Members of a family of internally displaced Syrians sit in an underground shelter in Idlib province. The photo was taken on Sunday, February 23.

Aid workers say one challenge is that supplies including blankets and tents are often put in place in cities but those who are fleeing from the fighting often change direction. “Logistically, it’s extremely hard to even know where to go to deliver aid,” says Meridien.

Current funding is “simply not enough,” says Touma of UNICEF: In January the U.N. released a new Humanitarian Readiness and Response Plan for northwest Syria requesting $336 million to help 800,000 refugees. Just last week the U.N. upped that amount to $500 million — for the next six months to address the massive displacement since December, which it now pegs at 1.1 million.

“We will be working with member nations to secure that funding,” said Farhan Haq.

Mona Yacoubian, senior adviser, Syria, Middle East and North Africa at the U.S. Institute of Peace in Washington, DC, says an added element of despair is that the areas that are now relatively safe are so small that there is significant overcrowding. Even if a family receives a tent there may not be room to pitch it,

She notes that many of those on the run have been refugees for almost a decade: “It is a very vulnerable and traumatized population which adds a layer of complexity to their needs.”

On Feb. 18, the U.N. Secretary General called for an immediate ceasefire, The Security Council last met on Wednesday and were told by Geir Pedersen, Special Envoy of the Secretary-General for Syria that there had been no progress in stopping military actions in Syria since his previous briefing two weeks before.

“We join the U.N. in calling for an immediate ceasefire and for a halt to indiscriminate violence against the people of northwest Syria,” a U.S. State Department spokesman told NPR.

More than a dozen aid organizations held a press conference on Capitol Hill on Feb. 20 to ask for help in securing more aid and a halt to the fighting. At that event, former ambassador Ford called the current situation in northwest Syria “the worst-case scenario.”

Speaking to NPR on Monday, Ford said the scale of what is happening in Idlib “even by Syrian standards” is unprecedented in terms of numbers displaced and killed at one time.

The very cold weather — which is likely to last at least in the evenings for a few more weeks — adds its own harshness. According to a field report last week from Western Aleppo Countryside by physicians from Doctors Without Borders, a refugee family of four, including two children, all died of carbon monoxide poisoning from a faulty heater they were using in their tent.